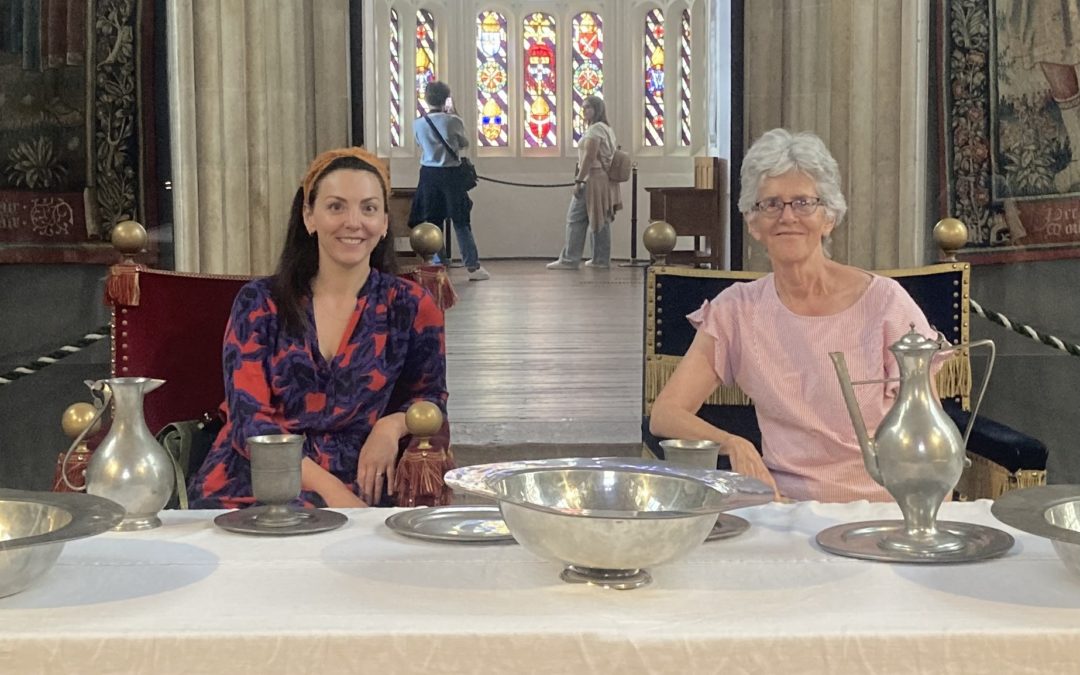 This month has been filled with catching up with old friends and family in the North. I travelled to Greysouthern (pronounced Greysoon), in Cumbria for a friend’s big birthday celebration in the village hall where I reconnected with friends from Liverpool. I then took a train eastbound from the Lake District National Park to Hexham, Northumberland, to visit my sister, Sarah. This pretty market town is filled with parks and gardens and has Hexham Abbey at its centre, an Anglo-Saxon jewel. 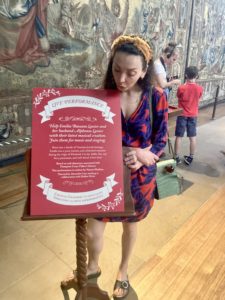 I loved visiting Hampton Court with my daughter, Naomi, for a performance of her play, The Dark Lady’s Song. It’s about Emilia Bassano and her husband Alphonso Lanier, of Venetian-Jewish heritage. Emilia was a poet, teacher and celebrated musician in the court of Elizabeth I in the 1600s. She was gifted, fiery and passionate, well ahead of her time! The play unfolded in the tapestry-lined Great Hall surrounded by a lively public seated on benches who relished the humour as well as the music and singing.

The Palace is hosting a series of beautifully conceived vignettes, spotlighting diverse characters lost between the pages of history. We also saw Kaamil Shah’s, The Chancellor and the Ambassador about Al-Annuri, the Moroccan Ambassador to Elizabeth’s court. He was clever, charming and charismatic and journeyed to propose an Anglo-Moroccan alliance. The Play was held in the Council Chamber, a wood-panelled venue with an audience gamely participating in proceedings. 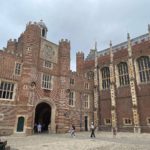 It was such a treat to have a day out together. We walked through the Rose Gardens to the café and sat outside for a salad lunch. As a teenager I lived in nearby Hampton and went on an occasional family day out to the Palace. As students in the 1960s my brothers worked as labourers on the palace roof, removing the ancient silver lead. This involved access through the Grace and Favour flat of Lady Ironside, who remained delightful, even as Jim and Dave tiptoed politely across her cream carpet; I’m told there was a side-line in recycled lead courtesy of Ron, Buster and Bert, to boost a meagre wage. I mined some of my brothers’ choice anecdotes for building site scenes in my novel, Renegade, set in the 1970s. 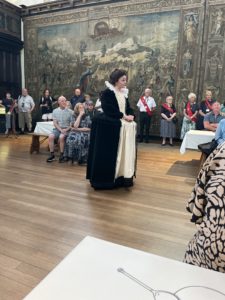 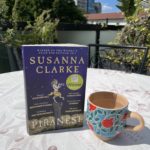 I’m a member of Canary Wharf Idea Store Book Club, and we read Susannah Clarke’s award winning, Piranesi. I’m not normally a fan of fantasy worlds, but this weird and wonderful novel pulled me in. I’d watched a Guardian interview of the author by Nesrine Malik, who very sensitively drew out the themes that vibrate through the work. It straddles the genres of fantasy, by creating a parallel universe, and thriller, with its page-turning twists and turns.

Piranesi lives in a house, which consists of cavernous halls filled with Greek statues of people and animals and birds and is subject to the ebb and flow of the tides. ‘The Beauty of the House is immeasurable: its Kindness infinite.’ Mysticism runs alongside Piranesi’s daily struggle for survival and he loves his strange home. But where is it? How does ‘the Other’ fit in, who makes random gifts and keeps Piranesi at a distance? The fantastic and mundane rub shoulders and we come to believe in this fabulously constructed world. Not everyone in the book club was carried away by the story, but we agreed on Clarke’s superlative literary skills. 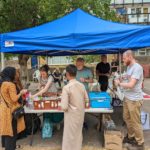 At home, I’ve been taken up with community activities as secretary of the Tenants’ and Residents’ Association for our Whitechapel estate. We received Council funding for a Summer Fun Day, held on a blazing hot day (admittedly that could have been almost any day in July), in the communal gardens, which we’ve tried to keep watered through the drought. The funding paid for free food (HalalHQ), a bouncy castle, giant outdoor games, a stack of chairs and a slightly wobbly gazebo. It was our first venture, and we were delighted that nearly 70 people turned out, including families from nearby Siege House. I should explain that we live near the site of the historic 1911 siege after a gunfight between Latvian anarchists and the combined forces of the police and army. Winston Churchill, then Home Secretary was pictured at the incident. 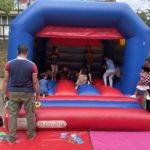 We also used the Fun Day to promote the idea of a mural to represent the changing communities over the last hundred years. The area still has remnants of a vibrant Jewish community, including Rinkoffs bakery round the corner. Next year we hope to raise funds for a mural on our estate on a wall ripe for artistic talent. Tower Hamlets boasts a number of community murals by Bablu Miah celebrating the area’s diversity, taking in Bengali as well as Black history and culture.

Lastly, an update on my September trip to India. I had an email from Aishwarya, who moved back home to Chennai from York with her husband and family just ten days ago. She found time to tell me that she’s linking me up with a historian with a good knowledge of the city, who will advise me on my quest for an imaginative backdrop to the life of Eliza Raine, the subject of my next novel. In two weeks I go to Hounslow in West London to complete my Visa application; I’ve had my inoculations (free, thank you NHS). My first trip to India is only a month away and now feels real! I’ve been asked, are you travelling alone? I say yes, I’m travelling solo but I won’t be alone. Everyone I meet will enrich my journey and I expect the experience will be more immediate for being by myself. And I already have a new friend in Aishwarya, who’s been so generous with her time.